okay, so my husband has been convinced that the baby is a girl for awhile (though we both absolutely don’t care), mostly because the chinese gender prediction chart told us that it would be. and no, my husband doesn’t normally believe in the horoscope (nor does he read them) or numerology or anything of the sort, but somehow the gender prediction chart slipped through and he believed. of course it helped that just after that, he saw three magpie’s on the path and that was it. girl it was.

now, i had no idea what a magpie even was, to be honest. i’d heard of them before, mostly from mother goose, i believe, but i had no idea what they were and i had certainly never seen one. but they are everywhere here in germany! and apparently, they are everywhere in england as well. so, after we saw the three magpies, my husband reminded me (told me) of the old nursery rhyme:

“one for sorrow, two for joy, three for a girl and four for a boy…”

now of course, i keep seeing one magpie and almost panicking. which i realize is slightly ridiculous.

i also was sort of thinking the baby was a girl – mainly because i think i really value women and my connections with them. though i was always “daddy’s girl”, i can’t imagine what my life would be like without the relationship i have with my mother. and because of my mother, i’ve been encouraged to develop other relationships with strong women, from my childhood idols (mirabai, sacagawea, and harriet tubman) to my grandmothers, aunts and closest friends. a girl? i can handle that.

which of course, i’m thrilled about. don’t get me wrong. even though i love women and girls, i also love boys and when i babysat, i always enjoyed the boys the most because they didn’t just sit around changing their dolls, they ran around and played and used their imaginations. though now (that i’m older and wiser) i believe that that is mostly because of how girls and boys are raised, not because of any inherent qualities in children themselves.

i think that i’m definitely a little bit nervous about it though. a girl, i know how to handle. a boy? i just don’t know.

(sent to me by my friend. i imagine this is from starbucks or pottery barn or something.)

i’m sure it’ll be fine, and of course, i’ve got my husband (who is definitely a “man’s man”) to be there as well, but i am definitely a bit nervous. but that’s all about once the little baby becomes a “real boy”. while he is a little baby, i am so excited about having my little boy and being able to dress him in adorable little outfits.

the real problem though is that his daddy and i can’t seem to agree on a single name for the little doofus. for girls, we had at least one or two that we both liked. for boys? nothing.

i like “weird” names like bailey and bennett (can’t you just see boy to the right as little bennett?), and my husband likes “boring” names like ryan and james, jr. i’m sure we’ll figure it out at some point. we’ve just heard the news, so we have lots of time to process and think of a perfect name.

we’ve also found a house, which i’m really hoping works out. it’s a beautiful house in dellbrück, the area of town that i really want to live in. and it’s a house! not an apartment! which is practically unheard of here! it has a yard! okay, that’s enough exclamation points. suffice it to say, i’m excited. fingers crossed!

as promised, i finally had my husband take a picture of the bump, which, as i’ve said, still just basically looks like fat, even though i know it’s my little baby boy. 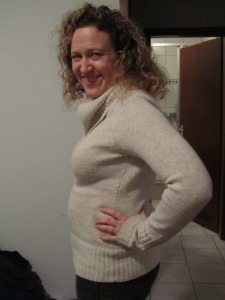 the baby this week is the size of an avocado (yum!) and is now able to hear us! or, as my husband likes to say, the little doofus can absolutely understand what my husband is saying when he’s lecturing him as to the benefits of having rooney or van persie as his captain in fantasy football. he’s also convinced the baby’s advice is what is keeping him first in the league (which he’s obviously thrilled about). and to be fair to my husband, who is an equal opportunity sports fan, he thought this when he assumed the baby was a girl as well.

i just can’t wait until i can feel the baby kick! even in our last doctor’s appointment, the doctor said she was pretty certain the baby is a boy, but can’t be 100% sure, because he was moving around, flipping and kicking the entire time. he’s gonna be an active little boy!

i’ll leave you now with a photo of the first onesie (baby grow to daddy) that i’ve bought for the baby (which i’m so excited about): 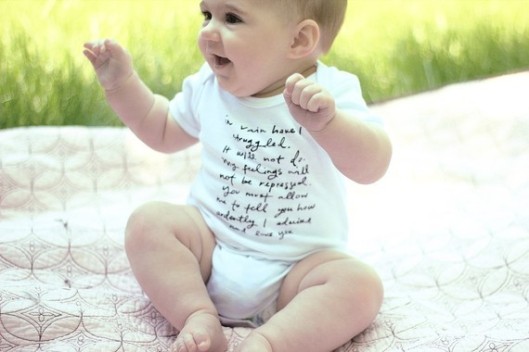 "in vain have i struggled. it will not do. my feelings will not be repressed. you must allow me to tell you how ardently i admire and love you." - mr. fitzwilliam darcy, pride & prejudice (jane austen, of course)

what is it all about?

rss (whatever that means?)