wow. such a whirlwind two days.

yesterday, we had our two week scan, as evidenced by baby doofus here: 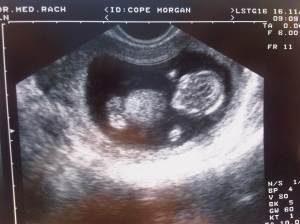 it was absolutely amazing. everything has been, of course, but after a month of just me, daddy doofus and the baby all on our own, i was a bit anxious to get back into the doctor’s and make sure everything was okay. there were a few days where i wasn’t sick or tired and felt “normal” and then i would stop, panic and think: what if something is wrong!!

of course, nothing was wrong and the little one is perfectly fine. more than fine, actually. you can’t tell at all in the photo, because the photo was nearly impossible to take as the baby was kicking and flipping and rolling over nonstop. my husband, the doctor and i were all laughing as she kept trying to get a photo and flip, baby would move again and we’d be looking at his/her spine… it was so cool to see, i’ve been playing it over and over again in my head ever since.

it was the first time that i felt like i had a real little baby coming and it really is just so exciting.

of course, then there’s the other side: my grandmother passed away yesterday at 5:20pm (pacific standard time or, the middle of the night for me) and i’m just left feeling… far away.

my grandmother and grandfather on their honeymoon in the dominican republic haiti (damn, laura, pay more attention to your grandma!)

she and i were quite close and though we had our issues at times (i didn’t always deal well with the particular brand of guilt that comes with having a jewish new jersian for a grandmother), there wasn’t a better feeling in the world than feeling her soft hand on the nape of my neck, softly and smoothly rubbing.

she had a difficult life and i get the feeling that i don’t even know most of it, but i do know for sure that she was a survivor. i always felt immensely blessed as a girl to have such powerful women all around me – my mother and both my grandmothers are all impressive, in their different ways.

she fought with my grandfather passionately, scoffed at my dad and aunt, guilted my brother and i and yet none of us ever had a bigger supporter in life than her. her sense of humor was one of her biggest assets and as she aged, her sarcasm and wit stayed keen and sharp. though she moved to california soon after we did (when i was three), she never considered herself a californian and would often remark on the “crazy” she’d see all around her, shaking her head and snorting, “californians”.

when i moved to san francisco, she started writing me letters on her typewriter and when i moved to portland, she switched to writing them by hand, as the typewriter got too difficult for her ever-shaking hands. she continued writing to me all throughout spain and when finally it was too much to write, she’d ‘speak’ through newspaper articles, sending me bits of the comics, circled typos she noticed and thought i’d appreciate and articles about my hometown, so i didn’t miss anything. i still have them all in binders, the older ones from san francisco and portland at home in my parents garage with all my books and the newer ones here with me.

i don’t know if i was the best granddaughter, but she often told me that i was. at the very least, i gave her my wedding. i won’t pretend to claim that i had my wedding in san diego because of her, as there were many people who wouldn’t have been able to come had we married in europe, but i knew then how much it meant to her and i’m so happy that she was able to be there.

my two grandmothers, my husband, myself and my little brother (who is also a doofus)

my mom said that she got a chance to print out the picture of the baby and show it to her in the hospital. and though she was in a semi-coma, my mom believes that she saw it and knew and luckily, i got to tell her about the baby before she went.

she was ninety years old and it was a peaceful ending to a bumpy but beautiful life, and she will be missed.

7 thoughts on “life and death”

what is it all about?

rss (whatever that means?)